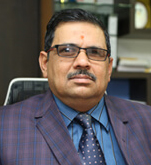 He has contributed more than 22 research papers in various Scopus Indexed and IEEE Journals. His areas of interest include Data Mining, Web Mining and Database Management Systems etc.,He has provided guidance for more than 20 M.Tech student projects. He is currently guiding 1 Ph.D.scholar. He has delivered many ‘invited talks’ and ‘Guest Lectures’ at National and International levels and has authored four books. With the keen interest to promote and develop research, he has organized many International and National Conferences like NCRTCST2012, NCRTCST2013, ICACCT2019 and various Workshops, Seminars etc.,

He has received many awards and honors for his service which include “SARVOTHAM ACHARYA PURASKAR” , “Organizational Excellence in Technical Education ” , “Best Educationist " , “DEWANG MEHTA” , “Best faculty", "Best HOD" etc., He has been a part of teaching, research, training and consultancy at CMRCET since 2006.With his rich academic and research experience, he has been instrumental in executing more than 25 Sponsored Research and consultancy projects funded by various funding agencies like DST, and AICTE and other renewed agencies. He is also the Co – Investigator for “Study of Neuro Medical Diagnostics of Cognitive Impairment in case of Parkison Disease Using Real-Time Multi-Channel Microelectrode Neural Recording System” funded by Department of Science and Technology. He has published two Patents.

He played a key role in the accreditation processes of National Board of Accreditation (NBA) and National Assessment and Accreditation Council (NAAC) and also in UGC Autonomous status.His vision, vibrant spirit and energy have helped in establishing CMRCET as a premiere institute in the state of Telangana. He has always been a very proactive person and has played a key role in all the activities of the College. He displays a keen interest in the affairs of the college and being a student friendly person is avidly interested in the academic progress of the students and staff. He held various positions like Head Dept. of CSE (2006--2009), Course Director & Head (Ist Year) (2009-2014) and Dean Academics (2014 – 2016) and since 2016 November as Principal. He is a fellow of Institution of Engineers (India) and member of various professional societies like CSI, ISCA and ISTE.

He was involved in organizing various workshops, Seminars and International and National conferences. He has given various lectures and seminars on his research area.

• Developing information Security Manual and Policies by Pyramid Softsoulpvt.Limited in 2013-2015 with 4.5 Lakh rupees.

• Principal Investigator for the MODROBS Project (MODERNISATION & REMOVAL OF OBSOLESCENCE) for an amount of Rs 10,00,000/-

• Implementation of Project Management framework in line with CMMIV 1.3 by USM Business systems in 2012-2013 with 7 Lakh rupees.

• Implementation of Project Management framework in line with PMIPMBOK by Eisalat Dubai, UAE in 2011-2012 with 5.5 Lakh rupees

• V.A. Narayana, P. Premchand and A. Govardhan, “A Novel Method and System for Detecting Near Duplicates for both Web Documents and Normal Documents” Application No. 627/CHE/2014 A for patent filed on 11 Feb 2014 and officially published in Official Journal of the Patent Office Issue No 08/2014 dated 21/02/2014, Publication of the Patent Office.

Fellow of Institution of Engineers (India)